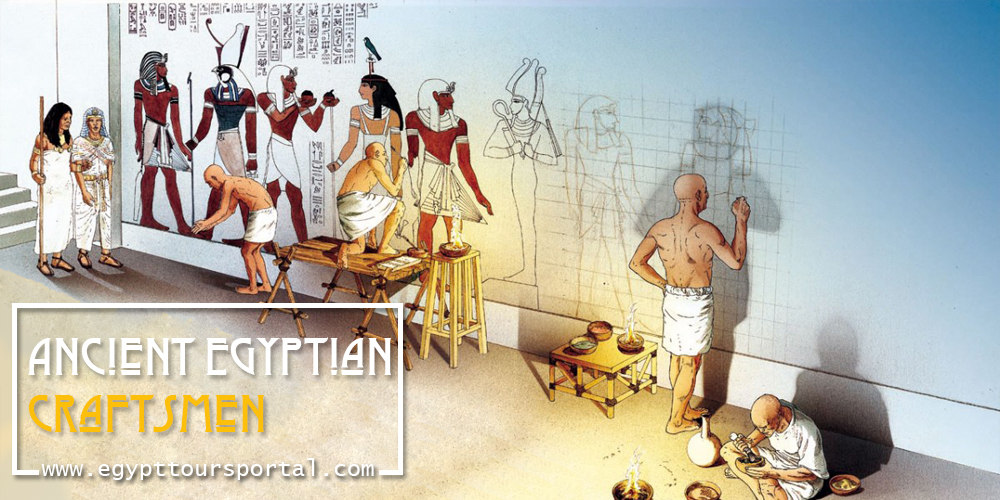 The ancient Egyptian craftsmen have existed in Egypt since prehistoric times which the main materials used were stones, clay, wood, fibers, ivory, animal skins, bones, and feathers. Later on during the history of Ancient Egypt metal was introduced in the crafting process, gold was found in its metallic state, silver was used as an adjunct of gold and ore was used after being smelted, they also used copper, tin, and iron.

Most of the artifacts made by the craftsmen were out of reach for the vast majority of the population. Their clients were mostly from the nobility or the wealthy middle class who can actually afford their services and their high-quality products. The economy and trade of Ancient Egypt also played a role in the flourishing of the craftsmen. The social class made all the difference when it came to the quality of the certain products as the furniture of the rich was beautifully carved while the ones of the middle class were less well-off made do with often crudely painted chairs and chests while the poor had to excess to these materials.

The Egyptian craftsmen or artisans were organized by a system based on hierarchies as most of them were employed by pharaohs, the centralized government or the temple priests. They learned their craft and art from their former masters who ensured stylistic continuity of their legacy of beautiful art objects created for the world of the living or the dead and by upholding the principles of Ma'at of balance. These masters could have learned from one's parents or neighbors or close relatives. They labored in a very organized workshop and special communities as shown by the builders of Dier el-Medina. They were honored and their abilities during their time but they remained anonymous. Ancient Egypt was blessed with highly sophisticated craftsmen varying from carpenters, stonemasons, sculptors, builders, weavers, blacksmiths, spinners, dressmakers, glass-blowers, potters, foundry workers, and scribes. Most craftsmen worked as paid workers for temples, or royal institutions as not everyone could have set himself up to be an independent tradesman.

Egypt has always been known to reflect the immortal ancient beauty better than anyone and there is no better experience than boarding a Nile River cruise on the life force and inspiration of the ancient Egyptian civilization through our Egypt tour packages to enjoy such a beauty.